Travel is the medicine for the soul

I’ve been happily tagged by Aaron of elatlboy to take part in the ABC’s of travel series.

Without further ado, let me share with you How I Roll- The ABC’s of Travel 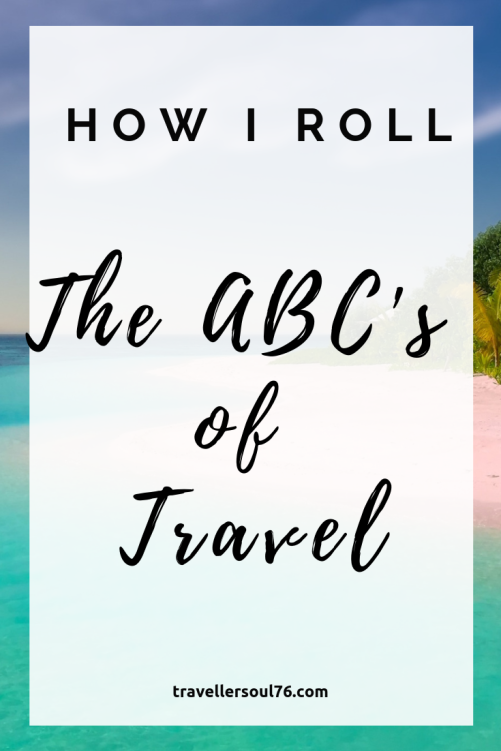 A- Age you went on your first international trip:

I was 7 years old. We moved from El Salvador to Montreal, Canada. It was in late October and I even remember our itinerary: SAL-JFK-YUL on the now defunct Eastern Airlines.

That was the beginning of my love affair with travel. What struck me the most was the weather that day; it was stormy upon arrival in NYC. I remember being scared but it calmed down and we were able to finally fly to Montreal.

We were so happy to be reunited with my dad who welcomed us with open arms. One of the best memories…EVER!

That was the first of my many trips abroad!

B- Best (foreign) beer you’ve had and where:

I have tried many brands of beer during my travels! The best ones I’ve had are probably Löwenbrau in Munich during Oktoberfest and Corona in Playa del Carmen while enjoying the sunset! However I do try the local beers 🙂

Food is one of my favourite subjects! I love to eat and also take photos of the delicious food I eat in any country I find myself in. Since I am Latin-American, I obviously like food from the region, whether it is Salvadoran, Mexican, Peruvian, Dominican, Cuban etc.

Over the years I have tried so many dishes from different countries, so I like Italian, Thai, Vietnamese, Chinese, Korean, Japanese, French, Portuguese, Greek, Turkish food among many.

I can’t wait to taste more foods. It will all happen in time 😉

My favourite is definitely Fiesole, Italy. The first time I was there was when I visited Florence. Once I looked down at the city from up there, time just froze. I said to myself: “Wow, this is where I want to live”. I love Tuscany and many other parts of Italy. Going there felt like going home. In fact, I was even awarded a language scholarship and had the opportunity to live in the Marche region for a month! One of the best in my life! Italy captured my heart & soul.

I don’t have a least favourite destination but there is one city or I should say attraction that really made me say: “That’s it?” Please see L “Let down”.

E- Event you experienced abroad that made you say “wow”:

The trip to the Whitsunday Islands in Queensland, Australia is by far one of the most incredible I’ve ever been on.

We took a cruise from Airlie Beach and sailed through the Islands. First it was Daydream Island, then Hamilton Island and last but not least, Whitehaven Beach.

As soon as we landed it was like being transported to another planet. The pristine white sand was just amazing and the turquoise water made it almost surreal. That was definitely a “wow” moment I will never forget. It truly is heaven on earth!

I enjoy every one of them but mostly airplanes and trains. I will never forget exploring Europe by train for the first time. I met some great people and had endless conversations with complete strangers 😉

I would say it’s the feelings of freedom and amazement. It’s incredible what you feel and all this happens when you leave your comfort zone and fears behind. Nothing can beat this! All you have to do is take that step, just let it go & move forward.

So far it’s been South Korea. The summer can be pretty hot & humid. You are sweating already right after taking a shower.

I- Incredible service you’ve experienced and where:

Well it’s a tie. My flights with Cathay Pacific from Seoul to Hong Kong and Singapore Airlines from San Francisco to Seoul were unforgettable.

Both companies have incredible service that I have not yet experienced with any other airlines.

The food is great, they are always looking after you, the staff is very professional and I’m amazed at how great they look after a 15 hour flight 😉 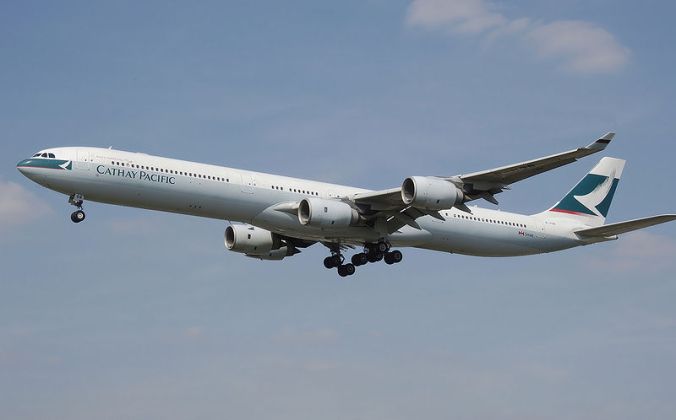 J- Journey that took the longest:

It was the journey from Montreal to Sydney, Australia. Flights + stopovers=26 hours!        It was very long but well worth it.

K- Keepsakes from your travels:

I collect stamps, postcards, magnets and shot glasses. Yeah they are things any tourist buys.

The best keepsakes are really the photos and memories I take back with me & cherish forever! 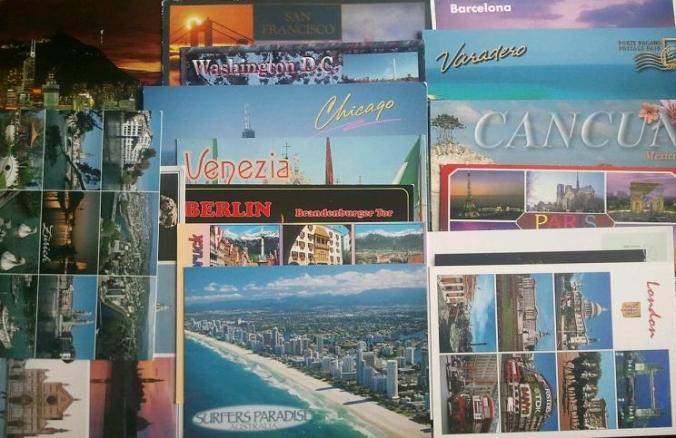 Postcards from my travels around the world

L- Let-down sight, why and where:

It’s the leaning tower of Pisa.

I was in Florence with my fellow classmates and really wanted to see the tower in person. So I told them I would not be joining them for a tour of the museums, so I head to the train station an hour later I arrived in Pisa.

Following the crowd, we turned around the corner of a street and what we were all waiting to see was in front of us.

I remember saying to myself “That’s it?”. It was truly a letdown, so I asked someone to take my picture and returned to the train station! 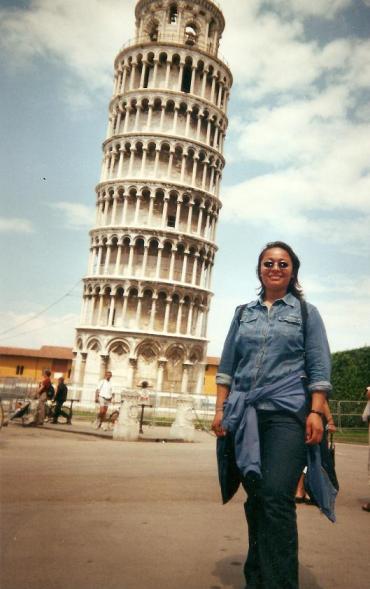 In front of the Pisa tower.

M- Moment where you fell in love with travel:

It has to do with letter A. Both my parents are travelers, so I’ve inherited that sense of adventure from them and I am very grateful for it!

I’ve got the travel bug real bad & don’t want to be cured from it.

Just the thought of planning a short or long trip makes my heart skip a beat. Raise your hand if you feel the same!

I have been very fortunate to have stayed in quite a few hotels during my travels around world.

The nicest hotel I’ve stayed at is the Ritz-Carlton in Seoul, the ultimate in luxury. I have also enjoyed the Kowloon Hotel in Hong Kong, The New York Marriott Downtown NYC that is before 9/11.

I have been indulging quite a bit in Seoul and discovered some awesome hotels (Samjung, PJ Pride & Joy, Seoul Palace among some) but I am pretty happy to have a nice place to sleep over.

O- Obsession—what are you obsessed with taking pictures of while traveling?:

At the moment I take pictures of every single meal or food that I eat. It is just so beautiful that it has to be remembered!

I have also been taking pictures of the rooms I have stayed in for the past 5 years or so.

P- Passport stamps, how many and from where?

I have 25 so far, in 5 different continents. It’s definitely not enough. I want to have at least 50.

I always try to find out what the highest point of a city is, may it be a mountain or a building.

I can mention a few cities where the view can take your breath away:

View of Downtown Montreal from Mont-Royal.

S- Splurge; something you have no problem forking over money for a while:

I always treat myself to a nice meal and drinks no matter where I am! 😉

I’ve seen the Statue of Liberty and been to Niagara Falls a bit too often.

I went to Osaka, Japan in 2001 right after the World Trade Center attacks on 9/11. I was there to get my Korean Working visa. We call it the visa run.

I remember arriving at Kansai Airport, getting on a train headed for the main hub of the city, Shinsaibashi station and I just stood there in wonder. I didn’t know where to go.

I remembered looking lost, so this kind old lady asked me where I wanted to go, she took my hand & took me to the right platform. She was an angel in person.

I haven’t encountered such genuine kindness anywhere else. That truly made my day & trip. I went on and had 3 fabulous days in the land of the rising sun!

Here I am in Shinsaibashi, Osaka, Japan.

V- Visas, how many and for where?:

Not enough. The ones I requested were for Australia and Korea (work visa). I am fortunate my Canadian passport allows me to go to different places without having to apply for visas.

W- Wine, best glass of wine while traveling and where?:

That has to be in every city I’ve visited in Italy, particularly in the Marche region where I lived and studied for a month.

We had wine almost every other night with my fellow classmates. It is less expensive than in North America. So if I had to choose between plain water or wine, It’d be the latter for sure!

I have come to appreciate good wine, hence I have tried many types from different countries. Here are some of my favorite brands.

X- eXcellent view and from where?:

Over a quarter of a century. That includes locally & nationally and around the world. Quite frankly, I have no intention of stopping anytime soon!

We, Montrealers, are serious sports fans. Whether it’s our hockey team (Canadiens, Habs, CH, La Sainte Flanelle or whichever name you want to call them), soccer (Impact) or any sporting event (like the Canadian Grand Prix held every year & the only one on the continent or Tennis championships) we live it to the max and suffer our losses too. Come on, those who are true Montrealers know this very well, RIGHT? You can feel the energy in the air & it’s contagious.

My own CH Jersey 😉

My babe, Fernando Alonso, at the Canadian Grand Prix in Montreal.

So there you have How I Roll- The ABC’s of Travel.

I’d like to invite you to create their own!

Until next time, many happy travels 🙂