I dream a lot. I do more painting when I am not painting.

It’s in the subconscious.

As you saw in Part 1, the Detroit Industry Murals painted by Diego Rivera between 1932 and 1933 inside the Garden Court at the Detroit Institute of Arts was certainly one of the best works of art by the celebrated, visionary and revolutionary  Mexican artist.

It is now time to observe and look closely at the two remaining sides of the frescoes: the South Wall and West Wall.

Since the main theme was the car making process, the South Wall depicts the assembly line, from putting together the chassis, body, doors, and vital auto parts until the very last quality control under very watchful and powerful eyes.

Workers are busy assembling a particular model in a strict environment, quality and quantity did matter.

Diego Rivera included some important characters to the mural, both male and females. They were watching the production line very closely, it’s as if they were there to give their stamp of approval but not yet giving the employees space to breathe or provide them with better pay as well as working and living conditions.

In fact, Rivera was clever enough to add his own special touch or his ideas. There is a hint written on one of the laborer’s headpiece which says “we want…”

in red, which means that he knew and supported their request or demand.

What strikes the most is the fact that the images call upon the viewer or observer and they send out a clear message: “We do hard manual labor for long hours, thus we deserve to be compensated fairly”. How do you interpret it?

On the other hand, it also makes us recognize the importance of team work. United, people can do many great things that will benefit others. Working together in unison and in harmony can help accomplish what some thought it never could!

Now turn to the last side, the West wall.

This is the culmination of the fresco cycle and that’s where everything concludes or comes to an end.

The mural is divided in three parts. On the top part, appears the aeronautics industry that began shortly after the automobile. 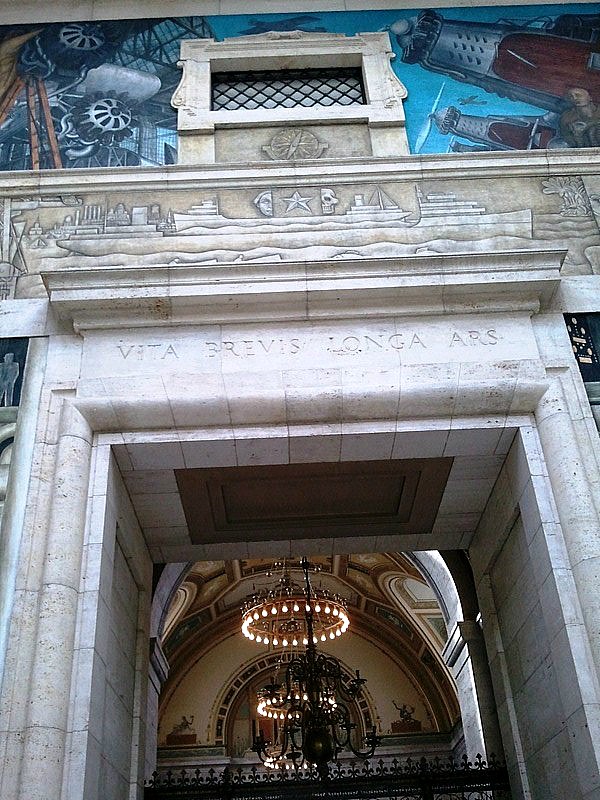 In the middle, there is a white and white panel where two ships are in movement, transporting goods from one place to another. On the left, workers are extracting the raw material, rubber from a tree which is brought in and unloaded at the port of Detroit, then transported and transformed in the manufacturing plant to create the final product, tires for all cars that are produced.

What is interesting is to see the star right in the middle, which is the division between life and death. In this case death is symbolized by a skull and life is represented by half of George Washington’s profile!

Right underneath there is a message in Latin originally spoken by “The Father of Medicine” Hippocrates that says: “Vita Brevis Longa Ars” which translates to “Life is short but art lasts forever”.

Last but not least, are the remaining two panels. On the left is a worker whose job is to foresee the function of the machinery

and on the right is the supervisor who poses before an energy generating turbine.

A duality can easily be perceived, one is of harsh conditions (manual labor) and the other is the benefits of advanced technology (upper management).

As you can see, Diego Rivera not only created an original masterpiece, he included many elements and a hidden message in all the 27 panels that composed these incredible murals.

He was not just an exceptionally talented painter; Rivera was a man with a broad vision, a rebellious and revolutionary spirit, bold, fearless, opinionated artist who put so much passion and love back into his artwork. He also fought for those who claimed their due rights and gave a voice to those could not express their true opinions back then.

Of course there were so many critics who wanted to tear the murals down when it was shown to the general public upon opening but fortunately, the people who believed in him stood by his side and did not let it affect them or change their minds.

How lucky we are today, some 80 years later to be able to stand in awes or sit and simply take it all in. This truly is a National Historic Landmark for many great reasons. If ever given the possibility, see it for yourself. I promise you that it is well worth traveling for!

I’m leaving you with a short and quick 360 degree video I filmed inside the Rivera Court.

This concludes my series of posts on Detroit, Michigan.

If you missed any, I invite you to check them out here

Many thanks again to everyone who welcomed me with open arms and I really can’t wait to go back there again.

Until next time, hasta la próxima.