Ah regrets. We all recount and share our travel experiences around the planet but we hardly (if ever) discuss the not so pleasant things that happened (or missed).

Who does not have any regrets? We all do!

For whatever reason we did not do something due to:

I have had my share of adventures and there is so much I have not spoken about. So you may be surprised.

Would you like to know what are My Top 3 Travel Regrets?

1- Love found in France and lost in Spain

My 2 month whirlwind tour of Europe was coming to an end. I was traveling from Italy, via France, on the way to Spain by overnight train. I was the only passenger in the compartment, so I claimed my sleeping berth.

Somewhere along the way, a group of backpackers got on board in the south of France. Among them was Dan, a fellow Canadian from Vancouver.  As soon as we saw it each other it was as if we had known each other before.

We hit it off immediately and we simply could not stop talking! We kept whispering until sleep got the best of us!

We woke up abruptly at dawn to change trains at the French-Spanish border and soon we were at our final destination, the ever amazing Barcelona.

I had already a place to stay while Dan and his crew did not. We exchanged emails, promised to see each other before I was due to leave for London to catch my flight back home to Canada.

We did meet again and it was so much fun! I never believed I could fall for a complete stranger but it happened! 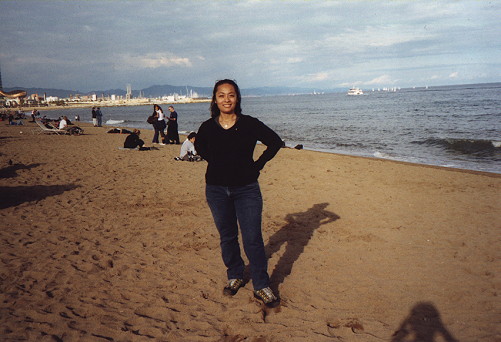 At the beach in Barcelona

Now I had to leave the city, so we decided to work things out in spite of the distance.

While I was busy with my move to another city and new job, he was exploring beautiful Spanish cities (Seville, Granada, Malaga etc). I would get extra long emails detailing everything from the sights to the food and what not 😉

I don’t know but somehow work and my new life kind of took over and our communication became sporadic and in the end it became almost a chore for both of us.

I truly regret not having put more effort and being more supportive of someone I truly cared about and loved (especially someone who loved travel as much, if not more, as I did).

Next time I will be more understanding and support my life & adventure companion.

2- Be the change you want to see

Nothing had quite prepared me for South Korea. I went to live and work there the first time back in 2001-2002.  It was going to break me apart or make me stronger.

I travelled to the Far East all alone and found myself in a parallel universe. Everything was so different, totally the opposite of what we were used to in the Western World!

I went across the globe literally only to find myself thrown in the ring (a.k.a teaching) with absolutely no training, no guidance, no help, nothing, zip, nada.

That threw me off and made me quite unhappy. Frankly, I was quite miserable for the first 3 months. I did not have any friends (co-workers were not too helpful). My only support was my family and friends back home and how can I forget the almighty!

As Mahatma Gandhi once said: “Be the change you want to see in the world”.

So instead of resisting and fighting the power, I decided to observe and try to understand their TKO (Typical Korean Operation Mode). Do as they did and just go with the flow and not take it personally!

That created an almost immediate change. Even my kids were happier and I had much more fun teaching them in class and during our many field trips.

With one of my students, Denver

With my kids at the park

I became more understanding and accepting that I even had a conversation with the director with the help of a mediator (a Korean teacher) who translated for me. We agreed to work in a better environment and if there were any other problems or difficult situations that we would talk it out and not hold it in because communication is really important.

This allowed me to have better relationships with my kids’ parents who came to see me to simply say “thank you for teaching my child. We appreciate your time, effort and love”. Their kids were almost my kids and they got the best I could offer them. I completed my 1 year contract and learned what diplomacy was and be calm under pressure.

I really regret not preparing mentally, emotionally and professionally. It is a privilege to be able to travel to the other side of the planet, be hosted (live rent free for a year), earn a nice salary (it got better) and knowing that you created a positive impact on many young lives is just priceless.

I learned that a positive attitude is everything 🙂

3-Write something worth reading or do things worth writing

My last regret is not having written down as many juicy details about my adventures!

I remember seeing everyone on the train, bus, and airplane writing down their experiences on a notebook (yes the good old days).

I simply decided to just live the moments to the max and capture them with my camera.

How times have changed! Now with all the new technology, everything is made much easier, instantaneous.

In all honesty, I think it isolates people more and more. Not long ago I went to Toronto for a long week-end and I thought young travelers would say hello at least or chat a bit but none of this happened. They only had eyes for their iPads, iPhones, Mac Pros (Ok Apple, I get it, you dominate the market but I’m staying loyal to HP & Samsung no matter what!).

Call me old school if you will, but I still love writing a postcard.

World postcards sent to my family

Sometimes I write posts (like this one) on a real paper pad (yes it’s double the work but love it). It’s therapeutic! 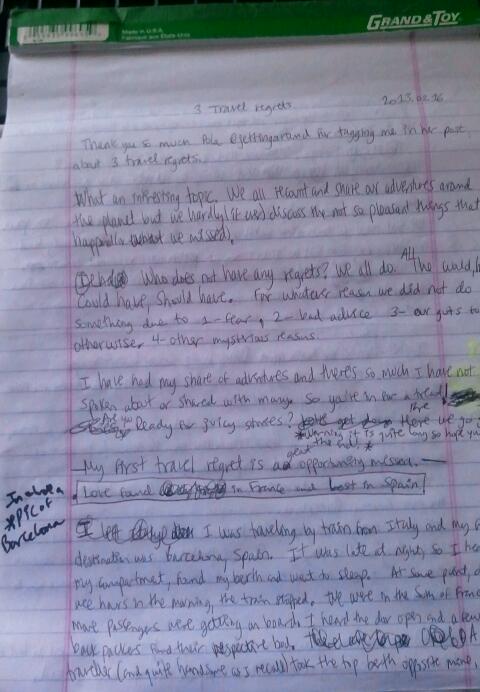 All in all I may have these regrets but I do understand now why they happened and only wish the best to all.

We all live and learn. Life is after all a series of  one great adventure after another, don’t you agree?

OK so those were my 3 travel regrets. Now I would like to invite the following persons (and fellow travelers) to share their own stories! Surprise us 🙂

Feel free to tag other travelers in return. Let’s keep it going!

Don’t forget to mention me in your post and let me know once it is published so that I can retweet it through social media.

25 thoughts on “My top 3 travel regrets”